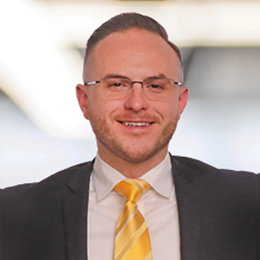 Sean Kiley is an associate in Carella Byrne’s New Jersey office who has been with the firm since December 2021. He focuses his practice on general civil litigation. Prior to joining the firm, Sean gained experience working at a boutique law firm in Morris County where he was involved in a diverse range of land use, municipal law, regulatory compliance, personal injury, employment, and general civil litigation matters.

Sean earned his law degree from Maurice A. Deane School of Law at Hofstra University in 2018. While in law school, Sean received a “Silver” award at graduation for dedicating more than 500 hours to the public sector during his third year. In the Summer of 2017, Sean earned academic credit as a Legal Extern within the Speedy Trials Unit at the Passaic County Prosecutor’s Office. A graduate of William Paterson University, Sean earned a Bachelor of Arts degree in Political Science and a Bachelor of Arts degree in Legal Studies in 2014. During his time as an undergraduate, Sean completed a summer abroad at St. Edmunds College – University of Cambridge, in Cambridge England where he studied Comparative Constitutional Law and International Relations.