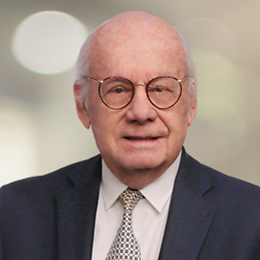 Recently retired from active practice and now serving the firm in an of counsel capacity, Peter G. Stewart joined Carella Byrne as a member in 1979. He has broad experience in many areas of corporate practice, with an emphasis on health care, real estate development, energy, and public utility matters. His practice also includes representing clients before various local, county, and state agencies and before the New Jersey legislature as a registered lobbyist.

Peter not only has served as trusted counsel to countless clients, he has also served the public in several elected and appointed positions. He was elected mayor of his hometown, served as an elected member of the Essex County Board of Chosen Freeholders, and was an Assemblyman in the New Jersey Legislature. Appointed by two Governors of the State of New Jersey as a Commissioner of the Essex County Board of Taxation, he also was Chief Counsel to the County of Essex and served as the General Counsel to the New Jersey State Democratic Committee.